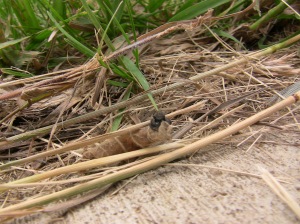 Phidippus sp. from the AAS 2015 after meeting trip.

Arachnolingua uses the notion of a narrative as a container of claims relating to a set of ordered events and their associated individual organisms and substrates.  In simpler words, a set of actions that make a story because they have an order.  It is important to be able to talk about narratives in the natural history/ethogram context because narrative descriptions are common.  They are different than statements about types (e.g., colors of body parts of particular species) because they are about individuals and the events that those individuals participate in.

There is surprisingly little in large set of OBO vocabularies that captures this sort of data.  There are classes for ordered series of actions when considered as plans (e.g., plan specification and planned process).  The first of this is a directive information content entity that specifies a plan and has subclasses such as algorithm, software, programming language and study design.  As a directive, it might denote or describe a class of processes that would realize the out come of the plan, but that’s different from describing what actually happened in particular circumstances at a particular time with particular actors. The second is a process that results from the execution of a plan specification.  The second class is something that might be denoted by a narrative, for example a description of what happened when a plan failed.

There is a class ‘narrative_object‘ in the information artifact ontology.  It is a subclass of information content entity and is defined as a set of propositions.  That’s well and good, but there is no notion of participants or more importantly that these propositions have any sort of (temporal).  However, I am inclined to go with this as it is at least the right sort of thing and will serve as an over abstracted umbrella classes for narrative individuals as they are defined in arachnolingua.  It would be better to subclass this to include ordering and the idea of individuals filling roles, but it will do for now.  I really don’t want to start introducing new classes for this sort of thing if I can possibly avoid it.  Ideally, Arachnolingua wouldn’t have to introduce any classes, but the process of finding OBO homes for needed classes, especially in situations where term brokerage support or even active curation is unavailable will eventually force my hand on this.   But narrative_object will do for now.

Final note: If you look at the editor notes for this term, Larry Hunter thinks this term isn’t useful and should be replaced by textual entity and figure.  He’s half right – it doesn’t provide much more than textual entity, but the way to fix it is to reduce the granularity, not scrap it.  Textual entity may be a more proper superclass for arachnolingua claims than information content entity, but as such, it fails to distinguish claims at the class level from claims about individuals and their events.